skip to main | skip to sidebar

My Thoughts on Creativity 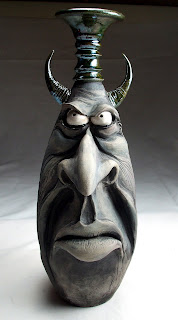 I find after putting a new piece on EBay that my business mind and emotions fluctuate based on the bids and prices that the piece goes for. My business mind is more fulfilled the higher the price goes. An artist gets his fulfillment from the act of creating and from reflecting on what he has just created and seeing other people reflect on what he has created. I believe that creativity is a higher and more fulfilling calling in my life than the business of making money. But we all need money to live. For an artist to truly find this calling, he must shuck many desires that the rest of the world thinks are important. He must live simply, stay out of debt, and stay away from other things that drag him down and don’t add anything to him (Drugs, alcohol.) These things and the problems that they bring hinder the true act of creativity in its purest form. TV is another thing that squashes creativity. It is like a drug.

As I walk down the street of my neighborhood at night and see the dim flickering blue lights coming from the windows and no other people in site, I wonder how our life and community would be without TV. Maybe we would see more people sitting and talking on their front porches or playing instruments to entertain themselves leading to new creative forms of music. Instead, I don’t know many of my neighbors. If it were not for TV a man may come home from his job and work on a creative side project instead of sitting for 4 hours to being entertained to death. It is a slow death of the true calling and potential of that man. What about the writer who never writes but spends 4 hours a day watching TV. Are we missing something? I still love CSI, which I watch over the Internet, but that is pretty much the only show I still watch. I got rid of cable, even though it still comes to my house for free. I did this just to see how my life would change. It has changed for the better. I have spent more of my time on creative projects and thus have become more creative.