skip to main | skip to sidebar

It was my turn to go on a sales trip, to walk into art galleries and gift shops to try to sell some pottery to make some money so the business could continue. I needed at least $2,000 to be able to pay the bills that were due and to get paid myself, and I was traveling with a full van load of pottery. I had never really done this before, but my business partner at the time had gone on several trips like this and had always been successful at it. Since we already had many stores within a six-hour driving radius that sold our work, my plan was to start in West Palm Beach, FL, which was about 8 hours away and work my way down the coast until I was out of pottery. I can’t remember all of the details of the first several galleries that I visited on that first day, but I can tell you that by the end of the day I had worked my way from West Palm to Miami and had only sold about $90 worth of pottery. This was very discouraging, but I had a couple of days left so I decided to keep on trying.

The following day I went to several more galleries in the Miami area with much the same response so I kept working my way out to the Keys. By nine o’clock that night I was in Key West on Duval St., 13 hours away from home, trying to find a gallery that would buy some work. I had only made about $200 that day and was starting to wonder if I should pick another career. I had not been rejected by every gallery that I had visited. At some of the galleries the owners were not there, or they were already overstocked, but many of the owners just said NO. It is not easy to get rejected, to have people say no before you even open your mouth, or when they make critical statements about your work. But sometimes you have to remind yourself that there are always a few people that will be drawn to your work and will love it. That makes it all worthwhile.

There was a glimmer of hope before my long trip home. A worker at a gallery in Islamorada (a small town in the Keys, just past Key Largo) told me that the owners would be in the next morning and would probably like my pottery. It was late so I got a cheap motel room and decided to stop there first thing the next morning and then start the long drive home. The next morning, I went to the gallery and the owners, Dwayne and Cindy King, were there. We had a pleasant and relaxed conversation. Cindy ended up buying almost everything that I had in the van. I left there with a check for about $2,500 and a big boost to my moral. The name of the gallery is The Rain Barrel Sculpture Gallery, and it became my favorite delivery destination. I would make that trip three or four times a year for the next nine years. I had visited around 14 galleries before I found this one. In most situations it is rewarding to be persistent.

It is a pretty long drive down there, but well worth the trip. I would always start to get sleepy about the time I would get to the outskirts of Miami. To remedy this I would search the radio dial for one of the high-energy Latin dance radio stations, roll down the windows and crank it up. It is almost like a foreign country when you go that far south, but I always enjoyed the experience. On most of the trips down, I would find an Indian owned motel in Homestead, FL, just before the Keys. Once you’re in the Keys, it is harder to find a place to stay and the rooms are always more expensive. The next morning I would drive another hour to the Sculpture Gallery. This part of the drive is beautiful and something that I believe everyone should experience.

Dwayne and Cindy are both artists and have a pottery studio next door to the gallery. They do bronze sculpting and they make jewelry at the studio as well. Much of their work is sold in their gallery. One of the reasons it became my favorite delivery trip was the great conversations that we had while I was delivering. We had a lot in common and a lot to talk about when it came to art and pottery, but we would also enjoy a nice lunch and discuss everything from politics to travel. The atmosphere was so laid back, relaxing, and enjoyable that I can see why many people choose to live there.

I’m glad that I searched until I found a jewel among all of the stones. It has been about a year now since I last went down there but I’m looking forward to taking another trip with some new work from my new pottery studio.

Thanks for reading. I hope you can pay them a visit one day. Mitchell 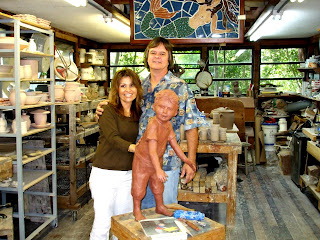 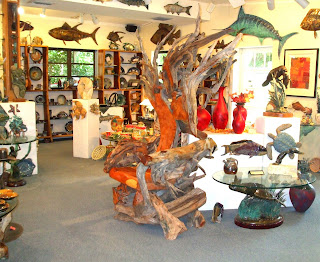 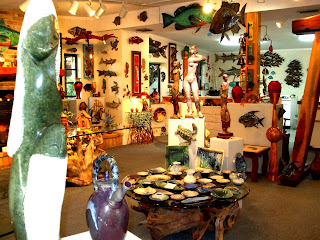